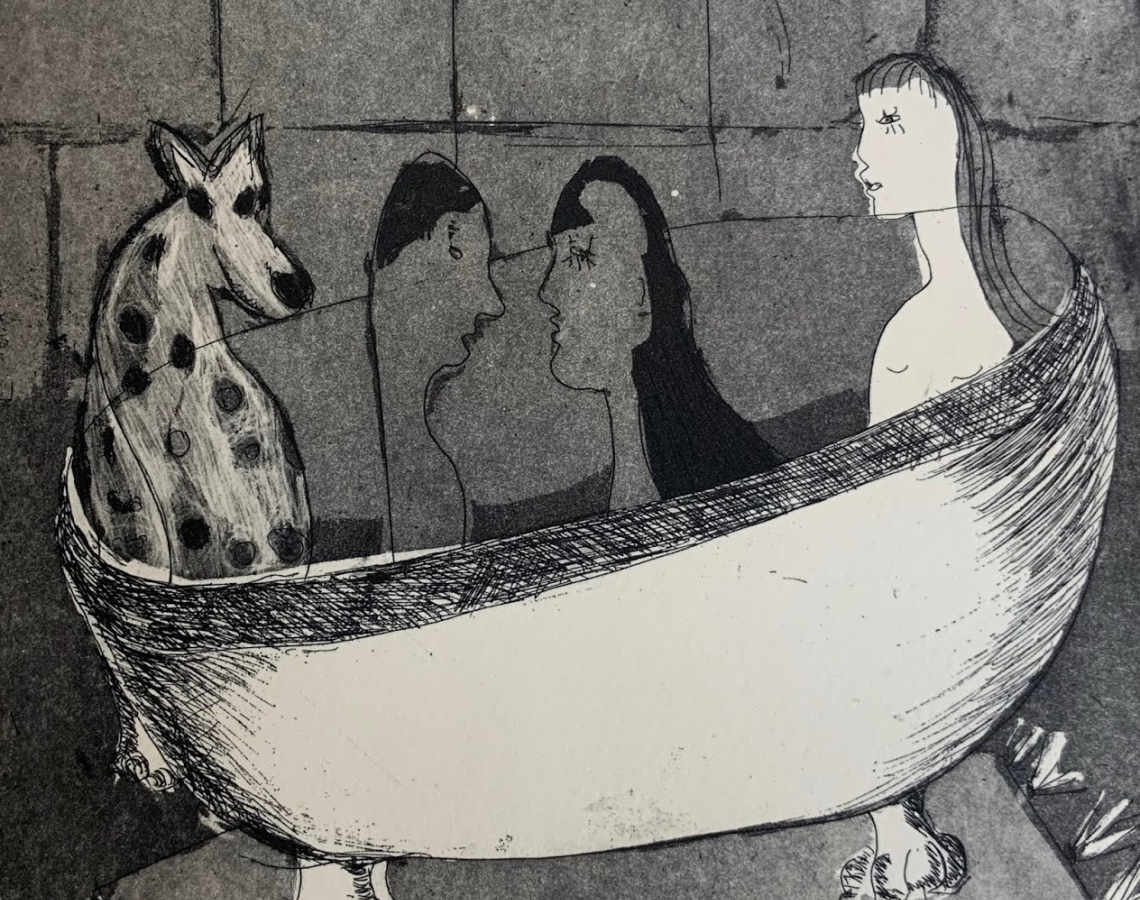 The title of the show refers to William Hogarth’s series of the same name ¬– a moral tale of the short life of one ‘Moll Hackabout’ who travels from the country to London, falls into prostitution, and succumbs to syphilis and death.

Daye-Hutchinson’s interpretation of the sequence goes beyond the scope of Hogarth, not only in comprising 12 etchings as opposed to Hogarth’s six engravings, but also via a prologue in which we learn the motivations of the young woman to leave her ‘shit hole’ of a village and seek her fortune in the big city by following her father’s suggestion (and against the will of a ‘disapproving mother’) to attend art college.

In Where you came from, our young protagonist stands awkwardly in a dark space of her own, a foreshadowing of the slab she will later lie on. Buildings loom in the background – one pencil-like (a reference to art college?) and turreted like Rapunzel or St Barbara’s tower. Is the horse her mode of transport as with Moll, or a reference to the village, or a symbol of her father next to a Guernica-like face in profile which strains to follow her, the mother perhaps?

Leopard on a pedestal features the eponymous large cat, next to what appears to be a Dyson ‘pedestal fan’. Posed odalisque-like on the floor is our writhing protagonist, seemingly entranced by the lures of the metropolis. The horse and floating face observe in silence.

The marriage sees her dressed in a simple white gown and oversized shoes beside the ghostly figure of the groom. On the left, an ominous black bird with splayed wings perches above a tasselled rug with a snake pattern. The presence of man, woman and snake is like the premonition of the fall from grace.

In Under the spotlight, the heroine is more sexy and confident, reclining with a drink in her right hand. A child-like silhouette on the floor unsettles the harshly lit scene. Without volume it is like a stain, or a miscarriage, a shed skin, or the artist herself.

The hyena returns in The onlookers, accompanied by another in the shadows. The animals are beautifully executed – the artist applying a tone using aquatint, and then burnishing it back to create soft chalky lines. In The cat and the blackbird, a white figure lies Marat-like on the ground in an ambiguous eyrie-like space, watched over by a white cat and a black bird.

In The ascension, the blackbird is now a dove taking flight – the conjunction of both birds reminiscent of Delargy’s Beckett series. A head (or two?) emerges from a flickering bonfire, while a shadowy angel conjures the apparition from the flames or simply warms his hands beside the fire. The background is a gorgeous velvet black speckled with stars where the artist has perhaps applied a hand-shaken aquatint or spattered the area with stop-out varnish.

As with Horgarth’s final scene, The beginning or the end has a cyclical quality to it. We seem to be back in the countryside of the prologue or the afterlife. But this is no ‘shit hole’: but rather a bucolic landscape with the heroine reclining under a tree, in Moll’s hat and nuzzled by sheep. The father and mother figures reappear, but seem softened.

From Joyce to Atwood or indeed David Hockney who interpreted Hogarth’s ‘A Rake’s Progress’ (recently exhibited in Belfast), the use of a prototype source has been employed as a framework for inspiration. Although conceived in the same spirit, with similar use of animals as symbols, snippets of text, and biblical and contemporary references, Karen’s suite of works is not a modern retelling. Her print cycle is more elliptical, and steeped in mood and symbolism, and she shows compassion towards her young heroine. There is much to take in here. Like Hogarth’s, the prints ask to be read; yet their meanings can never be pinned down. In terms of technique, the works are a master class in printmaking, with a balance between premeditation and spontaneity.

The catalogue urges to consider each as a complete work in its own right; however, to only view the pieces in isolation would deny us of the subtle interplay and enduring impact they achieve as a whole.